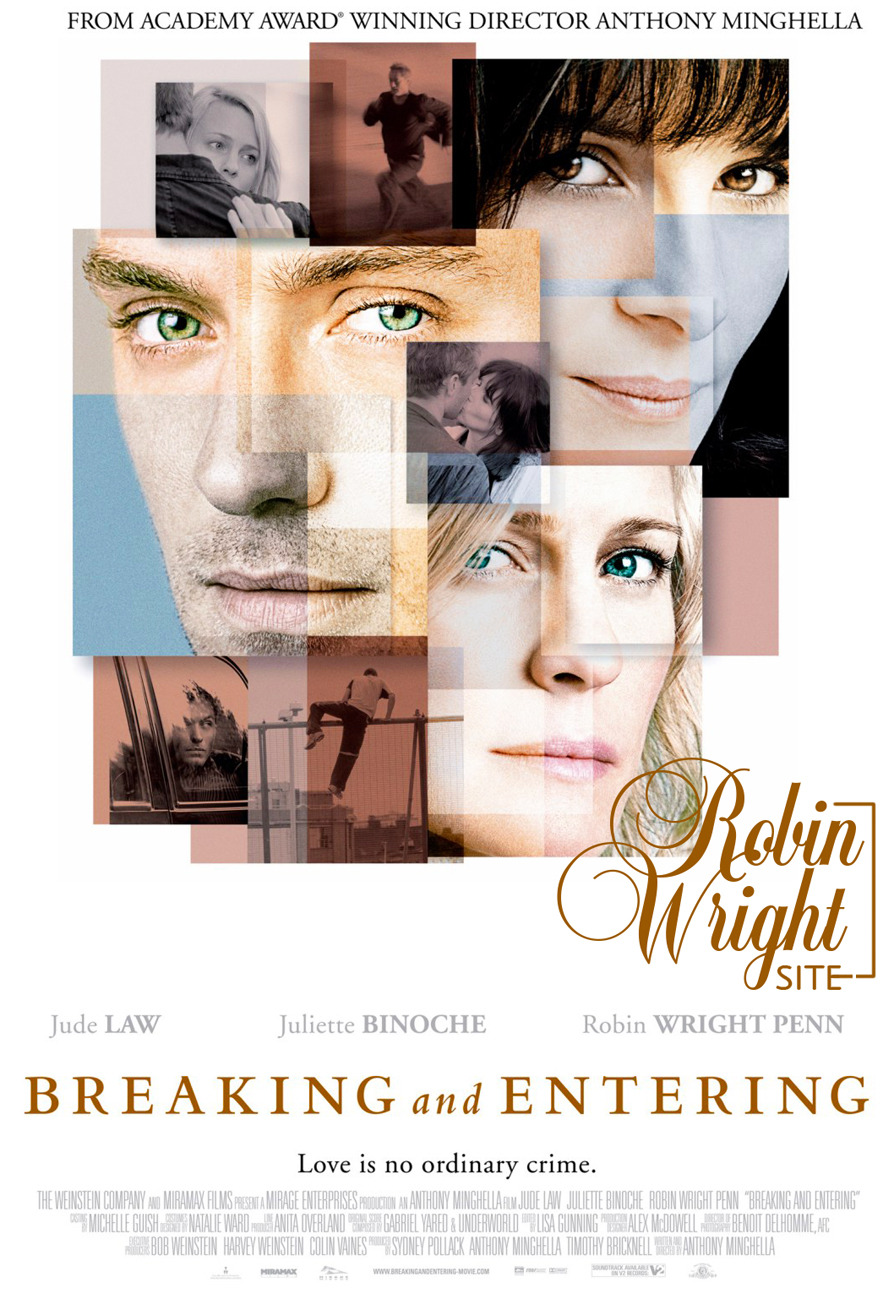 Plot: Will (Jude Law) is a successful landscape architect. His young, vibrant company has recently relocated to King’s Cross. His office immediately attracts the attention of a local group of thieves. After one of the break-ins, Will follows Miro (Rafi Gavron) back to the apartment he shares with his mother, Amira (Juliette Binoche), a refugee from Bosnia.

With his relationship to Liv (Robin Wright) already in crisis, Will embarks on a passionate journey into both the wilder side of himself and the city in which he lives.

Music by: Gabriel Yared | Rick Smith and Karl Hyde of the group Underworld 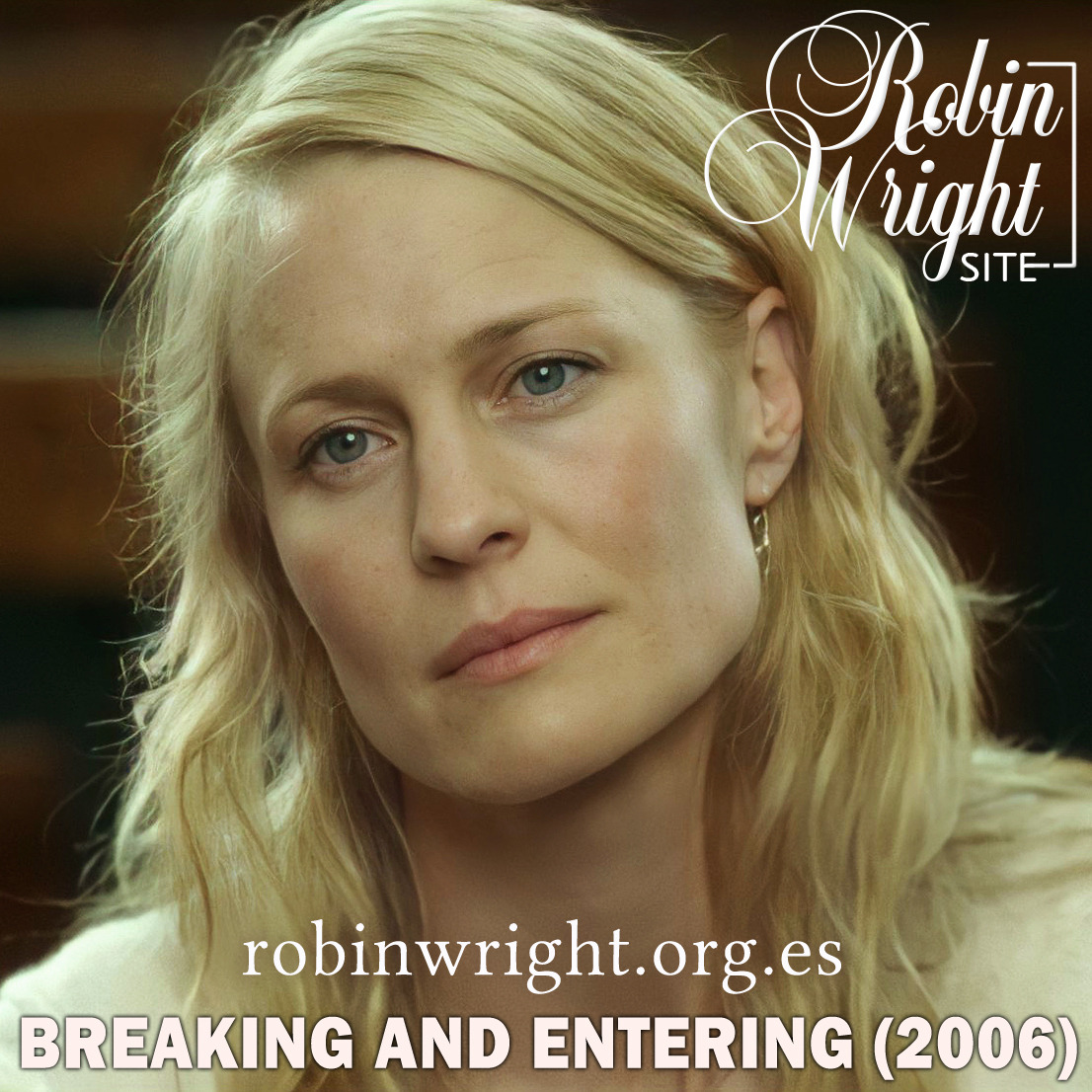 -‘Breaking and Entering” is the last film directed by Anthony Minghella to be theatrically released.

For the character of Liv, Minghella decided to make the Swedish character a Swedish American in order to justify the choice of Robin Wright with whom he had wanted to work for a long time. “Robin is somebody I’ve tried to get in my movies for a decade. She’s a fantastic balance with Juliette – like a ghost, so fragile, and pale, and introspective.”

Robin Wright and The English Patient

In 1995, Robin Wright had to turn down the chance to work with Anthony Minghella on ‘The English Patient’. Wright was Minghella’s first choice to play Katharine Clifton, but she had to decline the part.

Wright says: “Anthony and I had a meeting years ago for The English Patient, and I wasn’t able to do it because I’d just had a baby and they were going to North Africa for 16 weeks, which I wouldn’t do.”

Wright thinks Kristin Scott Thomas, who landed the role, was perfect in the 1996 film: “Sometimes you look back and go, “Oh God, I would have loved to do something like that.” But then I see Kristin Scott Thomas and she’s so great in the film- nobody else could have played that part. So I don’t have regrets in that sense, because it all worked out in the end.

For Robin Wright, the script and in particular, the character of Liv intrigued her because she found it “more nuanced than literal. That gives you something to explore,” Wright says.  “Liv has an inability to connect. She feels guilty about it, but she can’t stop questioning, analyzing and if you’re living in that zone of always searching, you’re not actually living. You’re too busy thinking and planning. It’s all about tactics. You’re always thinking ‘What if we did this? What if we tried that?’ instead of playing ball.  She can be with her child because it’s the one place where there’s explanation – she constantly explains to Bea what they’re doing, why they’re doing it.  But her relationship, where she needs it most, has none of that communication.  She’s isolated and bitter because the other person’s not coming into the bubble that she’s created.”

“Robin’s one of the few American actresses who’s remained enigmatic, interesting and private, always slightly edgy,” says Jude Law of his leading lady. “I really think now is her time – she’s very beautiful but there’s always been a lot more to her than that and I think she’s reached an age now where she’s going to be a tear-away and do brilliant work.”

“Liv and Will have a really good relationship in some ways,” says Law. “They are still very much into each other but they’re in that rut where they can’t talk to each other anymore, and every time they do, they ignite into some kind of attack or defensive move.  And it’s not helped by Bea, Liv’s daughter, who’s very needy, won’t sleep, collects things obsessively, won’t eat certain things and, at the age of 12, is like living with a very demanding four year old.  That puts huge pressure on Liv and huge pressure on Liv and Will.  Will’s actually a very good dad. He’s a stepfather, but he’s a really engaged, loving father and yet he feels that he’s excluded, not quite allowed in the circle even though he’s a part of the family.”