January 10, 2009: ACTRESS AND ACTIVIST ROBIN WRIGHT BRINGS AWARENESS OF RAPE IN THE CONGO.

The Christopher B. Rafael film center was sold out for the Marin premiere of the harrowing Lisa F. Jackson’s documentary, The Greatest Silence: Rape In The Congo. Actress and Ross resident, Robin Wright was on hand to introduce the film and to take questions after it aired.

Wright was on the screening with John Prendergast of the Enough Project, an organization committed to ending genocide and crimes against humanity in Africa. 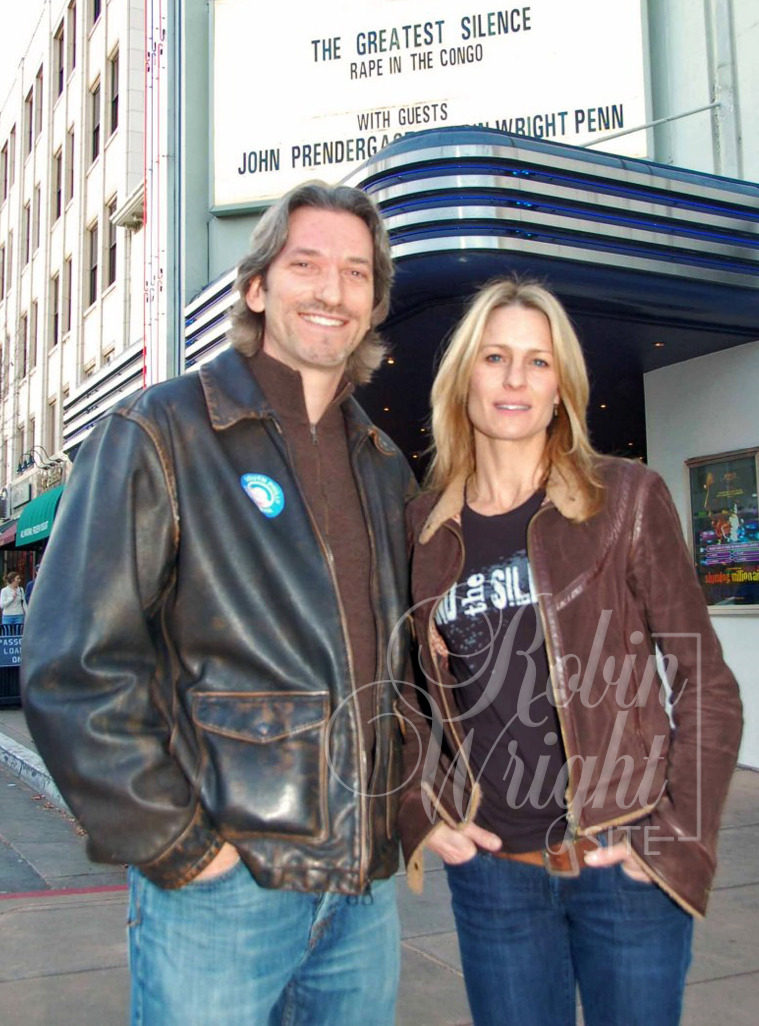 Whether it’s getting a table in a restaurant or raising awareness about the systematic rape of women in Africa, Robin Wright understands the power of celebrity.

“It’s such a strange phenomenon,” Wright told “You go into a restaurant with a hat on and jeans and ask for a table and they’re rude, saying, ‘I’m sorry. We don’t have a table.’ “So I ask, ‘OK, do you know how long it will be?’ Then they look at you and suddenly it’s, ‘Oh, God, Robin. I didn’t know it was you.’ And suddenly I’ve got a table. It’s pathetic.”

Robin Wright has no compunction about using her celebrity status to call attention to atrocities such as the sexual violence against women and girls as a weapon of war in the Democratic Republic of Congo. She says the issue has become “like my third child.” 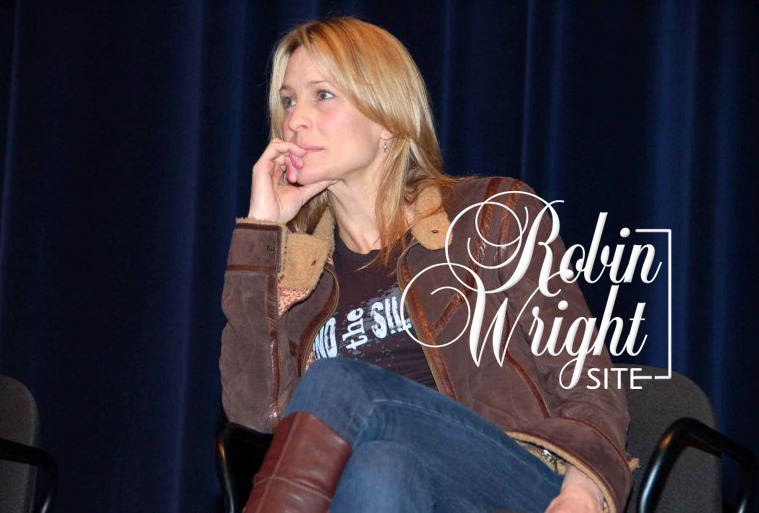 On January 9, the film screened at Marin Academy in San Rafael, where Wright’s daughter is a student.

“John (Prendergast) told me, ‘If you come to this screening, people will view it,'” she said. “He said, ‘You’ll be able to get an interview when we can’t. We need celebrities like you who are high profile to turn peoples’ heads.’ And I’m like, ‘Use me, man.’ I’m not a lobbyist, I’m not like him, out there trying to stop genocide. But use me in any way shape or form. For a cause like this, why the hell not?”

“What they’re doing is why I’m on this bandwagon,” Wright explained. “In the documentary, the soldiers are asked, ‘Why are you raping these women?’ And they say, ‘Because we believe what we’ve been told, that the woman has the power of the earth, she’s mother earth, and if we rape her, we get that power.’”

Making it even more horrific, what often happens in their culture is that the women who are raped are disowned by their husbands and shunned by their families.

“It has to stop,” Wright said. “It’s unacceptable. We as a country have to get involved. The United Nations needs to make it a priority to get more forces on the ground. We have to keep these women safe.” 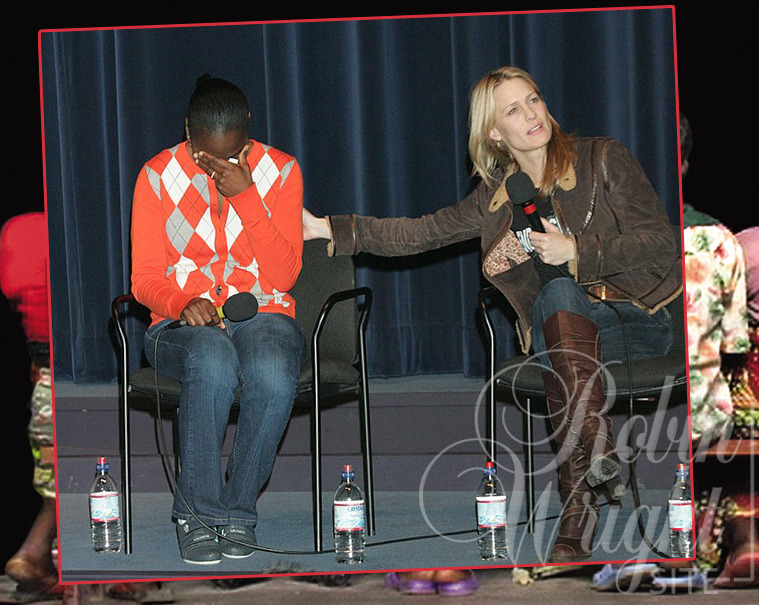 Wright got involved in this cause while researching “The Last Face,” a drama about two humanitarian doctors who meet and fall in love amid the South African civil wars of the mid-1990s.

In the film, still in pre-production, she’s to star with Javier Bardem, as the unrequited lovers. Her husband Sean Penn reportedly is set to play a supporting role as a journalist.

“It took years to get financing because it’s such a difficult topic,” Wright said, “It includes flashback scenes of the couple seeing bodies hanging from trees in refugee camps. It’s insanity. My character comes back and does what John Prendergast is doing in real life. She tries to raise awareness, to push the agenda up on the list, to get more peacekeeping forces on the ground.”

Prendergast wrote a best-selling book about the Darfur genocide, “Not on My Watch,” with actor/activist Don Cheadle. Wright became friends with him when he was an advisor on “The Last Face.” 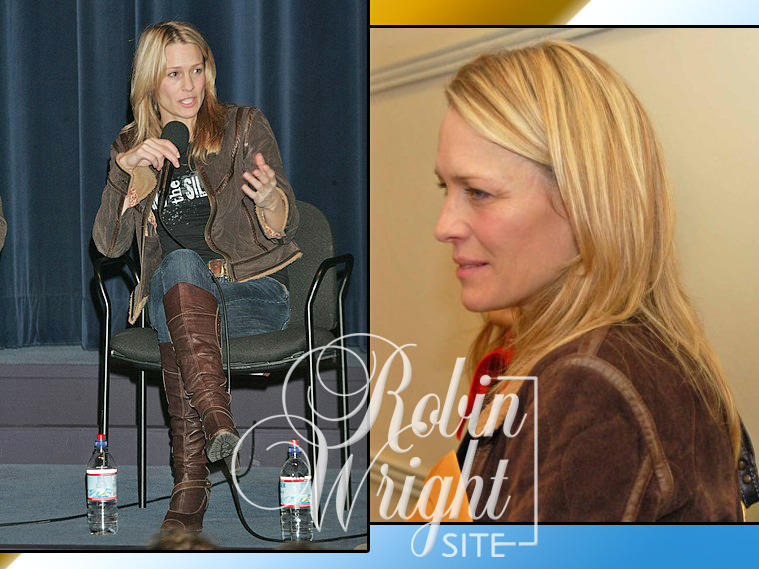 One of her first actions was to host a house screening of “The Greatest Silence” something she encourages others to do as well.

“You can buy the DVD online, so I bought a box of them and gave them out to 10 of my friends at the house screening,” she said. “Then those 10 friends did house screenings. We’re just trying to get the word out. The more awareness there is, the more we can get people to inform themselves, to sign a letter to the new president, to write their congressperson. All of this moves this agenda up on the list. The more people we can get, the better.”